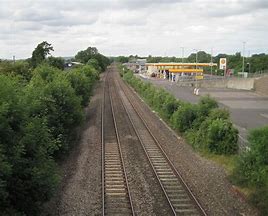 The Devon and Somerset Metro Rail Group held a constructive Zoom meeting earlier today to progress their ambitious plans to reopen rail stations in Cullompton and Wellington, which would create new, greener commuter options to Taunton and Exeter and the wider GWR network.

This follows the announcement by Transport Secretary Grant Shapps in May that this project was one of just ten nationwide that would be taken forward by the Department of Transport as part of its ‘Restoring your Railway’ Ideas Fund.  DoT officials are now helping Mid Devon District Council and Somerset West and Taunton Council develop a Strategic and Economic Case, which includes identifying the sites.

The old Cullompton railway station site is currently the location of a busy service station off Junction 28 of the M5. However, it is somewhat constrained by an awkward access so this could be relocated as part of the long-term redevelopment plans for this section of the motorway.